As it is rightly said it’s the journey that matters the most not just the destination, so this would be more about my journey to Kalpa Kinnaur Chitkul and Sangla valley and not just about the places.

When I visited Spiti a couple of years back I got to know Spiti can be reached via Manali or via Kinnaur and both the roads are beautiful and scenic in their own ways and dangerous too. Since that was a planned group trip, I couldn’t cover both the roads that time, which could have been the right way and cost and time effective too. So if you are planning a road trip to Spiti I would suggest enter from Shimla via Kinnaur and exit from Manali via Chandertaal, it costs the same money and consumes the same time.

So, summers are here again and we need to go for our mandatory summer trip. After a lot of research and discussions, watching a lot of videos and pictures, finally we decided to self-drive to Kinnaur district of Himachal. While researching we heard many scary stories about the roads as it’s also called one of the world’s most dangerous roads blah blah…but we have been to Arunachal, Leh, Bhutan and many more such places and have also gotten stuck between landslides etc. so this couldn’t be worse. But this year we preponed our vacation to Mid-May the moment my daughter’s summer vacation started, as it starts raining heavily in June July and this was the best decision ever. So here’s recollection of my entire journey with pictures …..

So after getting my Car’s(Toyota Etios) brakes checked, tyres aligned and balanced a couple of days before the journey, which is a MUST, we started our journey on a saturday early morning at about 4.30 am from Delhi NCR and stopped at Zirakhpur near Chandigarh at a cousin’s place for breakfast at 8.30 am after driving 270km. After having a nice sumptuous breakfast we resumed our drive again at 10.30 am towards Narkanda which is about 170km. We drove through Parwanoo, Solan, Barog, Shoghi, Shimla, Mashobra, Kufri, Theog, Matiana and reached Narkanda around 4.30 pm. We were in no hurry while driving, we were not in a rally, we stopped everywhere we wanted to, clicked pictures, had junk roadside street food like bun-chhole, Maggi, mango shakes etc we reached Narkanda which is at a height of 2621 metres (8599 feet) and finally checked in to our hotel The Shyam Regency. It was an average hotel for Rs.1500 per night and all we wanted is a clean room with clean toilets to spend the night at. 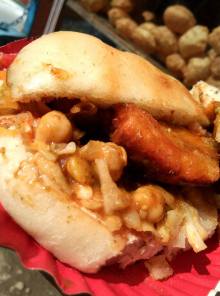 We inquired with the hotel manager if there is anything worth seeing and he suggested us to visit Hatu peak which was about 11km from the hotel, so we quickly got back to our car and drove towards Hatu peak.

Hatu peak is located at an elevation of 3400 m/12000 ft above sea level and is the highest summit in Shimla/Narkanda region of Himachal Pradesh and the last 5km uphill drive was probably the most difficult drive, the road was very steep and narrow and only 1 vehicle could pass at a time and all we prayed was that no vehicle should be coming down on us at the same time, but we had a few face to face moments with other vehicles where at times we had to reverse our car too. But the 360 degree view of Himachal from the peak was incredible and it was totally worth the scary adventurous drive.

While returning from Hatu we stopped at Narkanda main market and shopped a little, after all how can a good trip happen without any shopping when there’s a woman along 😛

Next morning, Sunday, we started our journey at 7 am towards Rakchham, Sangla Valley, that’s where our next hotel was booked at. The distance was about 190km and GPS suggested it should take about 7 hours, so once again we started our beautiful drive on NH5 through Rampur, Sarahan, Karchham and Sangla.

We stopped around 9 am somewhere for some Parantha as breakfast, got the tyre pressure checked and hit the roads again. It was one of the most scenic and picturesque drives with colorful trees, apple orchards, cherry trees, bridges, waterfalls and river Sutlej flowing with us throughout the journey. We even spotted so many hydro-electric projects on that road.

It was like a dream drive for any driver, there wasn’t any traffic, beautifully contructed roads and the scenic beauty to die for inspired us for scores of photo-op moments. Afterall, it’s not everyday that you see a waterfall very 10 kms, or a noisy river as your road cmpanion. All in all breathtaking views all around. Then, there it was, the iconic Kinnaur Gate at Chaura, which had actually motivated us to take this trip.

We never expected this spot to come so soon and we were pretty much contended by then with or pictures but we had another 90 km to drive till we reached our destination. The real excitement began here, roads started getting narrower, there was little traffic too and Himachal roadways bus drivers drive like crazy so it was quite a scary drive from here and the views on the both sides were breathtaking but I had to keep my eyes constantly on the roads ahead. We reached Karchham and the straight road headed to Kalpa and we took the right towards Sangla and off-roading began.

Soon we reached Sangla valley at an elevation of 2700 metres (8900 ft). It started drizzling a little so we just got down clicked a few pictures and continued further towards our hotel at Rakchham as we were curious and were told roads would be extremely bad here but within no time we reached our hotel Hotel Apple Pie Sangla at Rakchham. It was about 2 pm, we quickly checked in, the room was good with great valley view for Rs.2000 per night, it was clean with good staff and served great food and also had hot running water.

We were not tired, we quickly just freshened up and continued our journey to Chitkul and reached Chitkul in about 30 minutes. Chitkul is the last Indian village at Indo-Tibetan border. The roads were pretty bad, totally off-roading, very narrow and rough. We could even drive to the banks of Baspa river and it was a great feeling reaching there.

Chitkul, situated at an altitude of around 11,319 ft (3450 m) and is the highest inhabited quaint little village in the Sangla Valley. It has very less population, a single shop and couple of restaurants and hotels. Its little size not withstanding, this village has a lot to offer in terms of its beautiful scenic valley, flowing rivers and snowy peaks. This place is frequented by a lot of Bengali tourists from West Bengal, even I was surprised, so food wasn’t an issue. It was 3 pm, we hogged some amazing Bengali Non vegetarian lunch. It seemed expensive though but after all we were in the middle of nowhere technically and getting such finger licking food was no less than a blessing.

We reached back to our hotel and we were tired, had a nice home type Dal Chawal Chicken Roti dinner and ended the day. 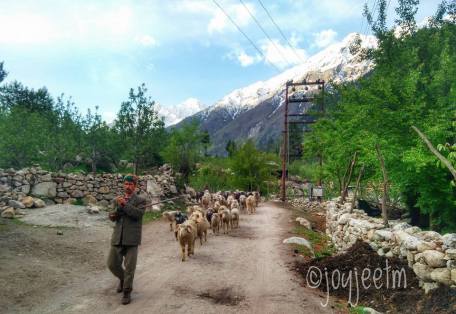 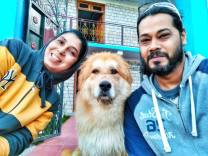 Next morning we woke up this beautiful view of snow-capped mountains, shepherds taking their sheep to graze, had our breakfast with Roxxy, a cute n loving mountain Dog at our hotel and started our journey again towards Kalpa. It was about 60 km so we started around 9 am, we crossed Karchham, Reckong Peo and reached Kalpa around 12 noon.

We checked in to our hotel Hotel Apple Pie Kalpa which is at an average elevation of 3000 metres (9,842 feet).The hotel had the best Kinner Kailash View from its balcony and we were simply awestruck, gazing a it non-stop.

The Kinner Kailash Shivlingam is a 79 foot vertical rock in the Kinner Kailash mountain range at a height of 6750 metres (22000 ft) and can be reached by a 3-5 days trek and considered one of the toughest treks in Himachal.

It was around afternoon and we quickly drove to our next destination, the suicide point at Roghi, which was another motivating factor of our trip. No we didn’t plan to commit suicide but the pictures we saw online were more than sufficient to inspire us to take this trip. This place is so beautiful, God knows how could someone commit suicide here. 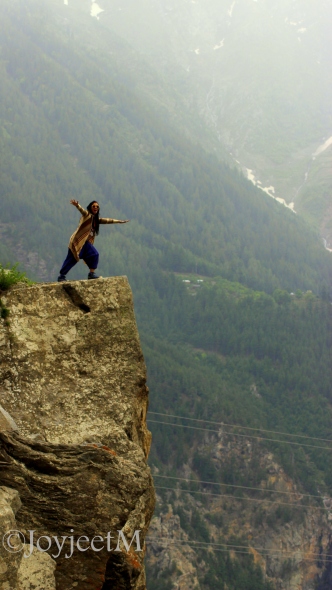 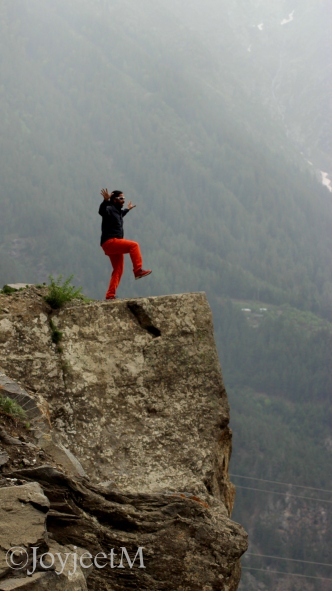 Then we went to Kothi Mata Mandir which is at a distance of 8km from Kalpa and 3 km from Reckong Peo, so ideally one should visit this while coming to Kalpa or returning from Kalpa. It’s a beautiful temple in the backdrop of Kinnaur Kailash range, its highlight feature being it has both hindu temple and Buddhist Monastery at the same area.

So that was the end to our Kinnaur trip. Next morning we started our journey again towards home around 8 am, gave our car a nice car wash under a natural waterfall on the way back and reached Chandigarh at a distance of 360km by 8pm at night. 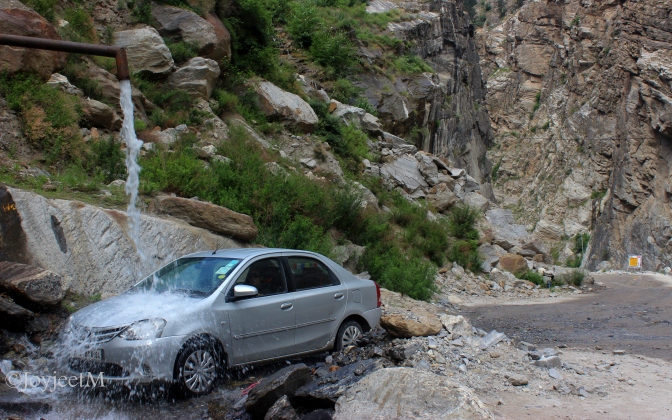 Feel free to ask if you want any more information and leave a note if you have liked or disliked anything here. Thanks for reading

A cook...a traveller...a photographer...a musician..A happy go lucky person Someone who just lives to live his life!! Here I just share my experience on travel and food ... View all posts by Live like Joy

One thought on “Kalpa Kinnaur Sangla Chitkul – An adventurous road-trip”